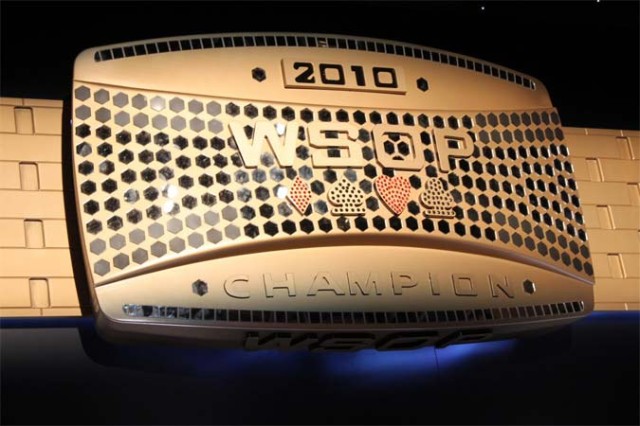 LAS VEGAS (Jan. 14, 2010) – With the 41st annual World Series of Poker® (WSOP®) just a short 133 days from commencing, the official rules governing the largest set of poker tournaments in the world are now available online at WSOP.com for all players.

Players are encouraged to download the PDF document from the official WSOP website and become familiar with them prior to playing in any events.

The 8-page, 105-rule guide details the variety of regulations in place under the following seven categories:

“Poker has evolved exponentially the last decade, and with so many new players to the game, it’s important that we as tournament officials, dealers and players are all familiar with the rules,” said Vice President of International Poker Operations and World Series of Poker Tournament Director Jack Effel. “We believe that as the industry leader, it’s important for us at the WSOP to have the most comprehensive rules in the game today.”

While no major additions were added to this year’s rules, several tweaks were made to better define some rules and to incorporate the revisions made in 2009 by the Tournament Directors Association (TDA).

A more manageable and enforceable cell phone rule (Rule #55) has been adopted, in part, in recognition of social media applications such as Twitter, which has become a favorite task of poker players.

The penalty tracking system which was implemented in 2009, returns and will be in effect for 2010. A total of 186 penalties were tracked, or an average of 3.72 a day during the 2009 WSOP. Penalties ranged from warnings to disqualification from the tournament and removal from the premises. The most common penalty imposed was a one-round penalty and the range of infractions included: exposing hand, acting out of turn, removing chips from the table, abusive language, excessive celebration, soft play, cell phone use, throwing cards, dealer abuse and discussing the content of a hand.

The WSOP, an annual poker extravaganza, which dates back to 1970, is televised exclusively on ESPN from the Rio All-Suite Hotel & Casino in Las Vegas and consists of a comprehensive slate of the game’s most popular variations running from May 27-July 17, 2010.

A total of 57 coveted gold bracelets will be up for grabs in 2010 – equal to last year’s total.

ABOUT THE WSOP:
The World Series of Poker (WSOP) is the largest, richest and most prestigious gaming event in the world awarding millions of dollars in prize money and the prestigious gold bracelet, globally recognized as the sport’s top prize. Featuring a comprehensive slate of tournaments in every major poker variation, the WSOP is poker’s longest running tournament in the world, dating back to 1970. In 2009, the event attracted 60,875 entrants from 115 different countries to the Rio All-Suite Hotel and Casino in Las Vegas and awarded over $174 million in prize money. The WSOP in December, 2008 was named the 7th most admired sports brand in North America by the Turnkey Sports Survey, trailing only the older and more established NFL, MLB, NBA, NHL, NASCAR and PGA Tour among sports properties. In addition, the WSOP has experienced groundbreaking alliances in broadcasting, digital media and corporate sponsorships, while successfully expanding the brand internationally with the advent in 2007 of the World Series of Poker EuropeSM. For more information on the World Series of Poker, please visit our website at www.wsop.com.